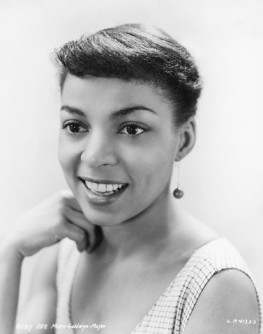 Please forgive the lateness of this post, but it has taken me a bit of time to comprehend this tragic loss.  Having met Miss Ruby Dee back in 2007, I can say first hand what a formidable, warm and spirited woman she was.  The way she looked at me and called me sister was one of the greatest moments of my life; and during our conversation, her advice to me to follow my dreams and persevere no matter what, has become my guiding truth.  One does not easily forget a woman like this, nor does one not grieve her loss.  Having just said good-bye to Maya Angelou, we are reminded once again that our legends, our great ones, are passing on and leaving us to pick up the baton; to carry on what they worked so incredibly hard for their entire lives.  Were it not for Ruby Dee, Maya Angelou, Lena Horne, Dorothy Dandridge, Louise Beavers, Hattie McDaniel, Butterfly McQueen, Juanita Moore, Diahann Carroll and hundreds of others that paved the way, I would not be the woman I am today with my position and success.  So forgive me if I feel this loss perhaps slightly deeper than others.

Ruby Dee, born Ruby Ann Wallace on October 27, 1922 in Cleveland, OH, and raised in Harlem, NY where she graduated from Hunter College, was a civil rights activist, actress, poet, playwright, humanitarian, journalist and breast cancer survivor of more than three decades.  While she had well over 100 film and television (and 34 theatre, including the debut performance of A Raisin in the Sun costarring Sidney Poitier, and that was nominated for four Tony awards) credits to her name, spanning back to 1946, she is probably most well known for The Jackie Robinson Story (1950), her groundbreaking role in A Raisin in the Sun (1961), Roots: The Next Generations (1979),  Do The Right Thing (1989) and American Gangster (2007) for which she was nominated (and  should have won) an Academy Award.  Her many accolades and awards include a Primetime Emmy, AAFC Award, Jury Award, ACE Award, a Grammy, four Image Awards, a Screen Actors Guild Award and several lifetime achievement awards, as well as the National Medal of Arts and the Kennedy Center Honors.

Her acting career, like many Black artists of the time, began at the American Negro Theatre where her peers were Harry Belafonte, Hilda Sims and Sidney Poitier.  After her time at ANT, which closed in 1949, Ms. Dee made several appearances on Broadway and at numerous theatre festivals including becoming the first Black Actress to play Kate in The Taming of the Shrew and Cordelia in King Lear at the American Shakespeare Festival. 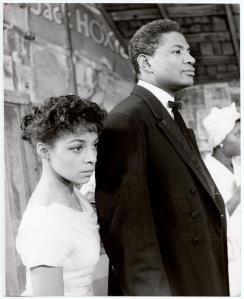 Ruby Dee, who took the middle name of her first husband, blues singer Frankie Dee Brown (whom she divorced in 1945), as her stage name, married Ossie Davis in 1948 having met while costarring in the 1946 Broadway play Jeb.  They soon became one of, if not the, most respected and fiercest acting couples not just in the African American community, but in Hollywood (Their infamous saying of “In This Thing Together” still rings true as Ruby Dee will be cremated, and her ashes placed in the same urn as her husbands and sealed forever).

While most knew Miss Dee as the magnificent actress she was, some fail to realize that, besides her outstanding contribution to the arts, she was also a civil rights activist. A member of the Congress of Racial Equality (CORE), the NAACP, the Student Nonviolent Coordinating Committee, Delta Sigma Theta sorority and the Southern Christian Leadership Conference, Ruby made it her life’s work to champion for equal rights. Dee, who with her husband Davis, associated with such influential and significant figures like Malcolm X, Black Panther Party co-founder Huey P Newton, and numerous others, emceed the Rev. Martin Luther King Jr.’s 1963 March on Washington, organized a boycott of Christmas shopping, urging Americans to support civil rights groups instead in the wake of the 1963 Birmingham, Ala., church bombing that killed four young black girls; in 1965

she and Davis marched for civil rights in Selma, Ala, and in 1999 they were both arrested as they protested the fatal shooting of unarmed African immigrant Amadou Diallo by New York City police officers.  During this time Dee also appeared in such politically charged films as Gone Are the Days and The Incident, which is recognized as helping pave the way for young African-American actors and filmmakers.

Sadly, in 2005, Dee lost her life partner of 56 years, Ossie Davis, but despite her grief, she passionately continued her work in both civil rights and the arts. She developed a one woman show, authored two children’s books and, like many Hollywood personalities, stood firmly against the war in Iraq.

No stranger to recognition and awards, in 2007 Ruby was inducted into the Weschester County Women’s Hall of Fame joining such other honorees as Hillary Rodham Clinton and Nita Lowey, and in 2009, she received an Honorary Degree from Princeton University.  Her powerful 2007 appearance in the film American Gangster, alongside Denzel Washington, saw her receive her first and only Oscar nomination, even though she was only on screen for a total of ten minutes; a testament to her great talent.

Ruby Dee has clearly left her legacy, not only through her family (three children: son, blues musician Guy Davis, two daughters, Nora Day and Hasna Muhammad, and seven grandchildren), but through all of the lives she has touched with her work as an artist and humanitarian.  Her humor, wit, beautiful mind, glorious talent and fierce sense of fashion (!!!) will be greatly missed.  They don’t make them like this anymore; she was in a class reserved for a very select few.  And we should consider ourselves lucky we had the opportunity to learn from such a prodigious and marvelously fascinating woman.