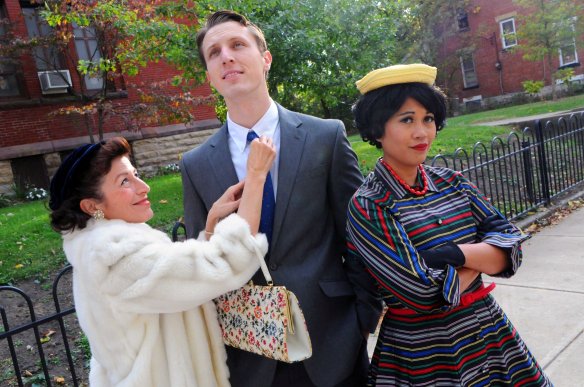 From left to right: Kathy Taylor (as Mrs. Mae Peterson), Justin Labelle (as Albert Peterson), *Nicolette Montana (as Rose Alvarez)
*Appears by permission of Actors’ Equity Association, the union of professional actors and stage managers in the United States.

Bye Bye Birdie, directed by David Bahgat with musical direction by Jeff Hamm, and choreography by Zoe Lathan, tells the story of Rock ‘n Roll legend, Conrad Birdie (loosely based on Elvis Presley), who receives a draft notice to serve in the army. As part of a publicity stunt, he travels to the small town of Sweet Apple, Ohio to sing one last song and plant one last kiss on a lucky member of his fan club. This musical with book by Michael Stewart, music by Charles Strouse, lyrics by Lee Adams, It has been adapted into a 1963 film, a 1995 TV-movie, and a recent 2009 Broadway revival. 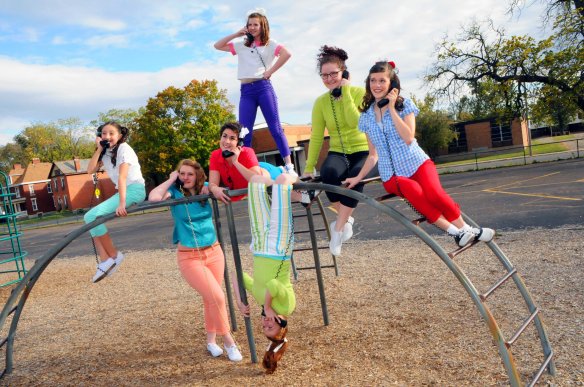 From left to right: Avery Bank (as Helen), Harriet Brennan (as Suzie), Madeline Bolzenius (as Alice), Katie Wagner (as Margie), hanging upside down is Cara Corrigan (as Deborah Sue), Margaret Hall (as Nancy), *Cherish Myers (as Ursula Merkle)
*Appears by permission of Actors’ Equity Association, the union of professional actors and stage managers in the United States.