“BlacKkKlansman was Spike Lee’s way of getting white people to like him again”, was my brother’s response when I told him I had just watched BlacKkKlansman. I was highly offended by his statement but I blew it off knowing he isn’t the film connoisseur, that I am.  Or, maybe that was the excuse I made for his completely ridiculous statement. Either way, I will say since the movie’s release I’ve noticed that many others in the black community share my brother’s opinion — that Spike Lee is pandering to a white audience; but with a story like this, shouldn’t he?

For those of you who haven’t seen the film, I’ll give you a short synopsis. Based on the memoir by Ron Stallworth, BlacKkKlansman is a dramedy set in the 1970s, about a black police officer, played by John David Washington. In an attempt to build his career as the first black police officer in Colorado Springs, Stallworth successfully infiltrates the Ku Klux Klan. With the help of Jewish police officer, Flip Zimmerman, played by Adam Driver, they expose the KKK’s potential violent plots, members who held positions in government, and their future plans for the “organization.”

The story in itself is quirky and funny, and Lee visually encapsulates the memoir perfectly.  Stylistically, the angles and the juxtaposition of shots, in addition to the transitions from scene to scene, this film had a different feel and quality than Lee’s other joints. It has a sort of Wes Anderson feel with a Spike Lee twist. Maybe that’s what made this movie seem so different; to some, like he “sold out,” but this movie wasn’t made for black audiences. This movie was an announcement, and an exclamation of what black people have been screaming for decades: That white supremacist (terrorist) groups, like the KKK, have infiltrated multiple government agencies, lobbyist groups, and positions of power to preserve the institutional racism that continuously, consistently, and historically oppressed  citizens of color. This is not a message that people of color need to hear. This is not a lesson that people of color need to learn. We know it all too well. This is a story for white people.

What helps push the message of irrational entrenched tribalism throughout the film is Topher Grace’s convincing portrayal of Grand Wizard David Duke. David Duke is one of the driving forces who helped change the public persona of the KKK. Topher Grace has a likeability factor, an unobtrusiveness that made him perfect for this part, that no matter what hateful word came out of his mouth, there was still something likable about him. That is what made David Duke, David Duke. Duke made racism seem more palatable for the masses. It becomes obvious in the film how important Duke’s new branding message for their organization is to the members through the special measures they take to safeguard the privacy of the club and it’s members. They stop calling themselves the KKK in public and discuss termination of the old tradition of cross burning among other things (no spoilers here folks). But as we all know, that ritual hasn’t gone away.

Sometimes, as an artist, they have a responsibility to educate their audience, as well as entertain. This movie is not designed to appeal to all black audiences, but to white liberal ones. We know as a community that we need white allies to help support our fight for equality. This film reflects the reality of the purposeful maintenance of the status quo, separate but inherently unequal for citizens of color. The white liberal politician sitting in the audience has the ability and resources to make a change at a higher level. If this was Spike Lee’s intention, then yes, he should cater to white audiences, but that doesn’t mean that black audiences shouldn’t see this movie. It’s a great story and it’s a joy to watch. I don’t think anyone should count it out just yet.

We can’t wait for this next Spike Lee joint!  Here’s the official poster for Netflix’s ‘She’s Gotta Have It’.

With the power of social media and the growing amount of content that is being produced for the web, anything has become possible for artists trying to gain some money to push forward content they believe the world would be interested in seeing through crowdfunding. Kickstarter and IndieGoGo, to name a few, have birthed numerous projects, from film to comics to video games, all by letting creators pitch their content to the web, and letting anyone who’s interested (within a certain time frame) donate money (for perks in exchange) to see this project come to life. 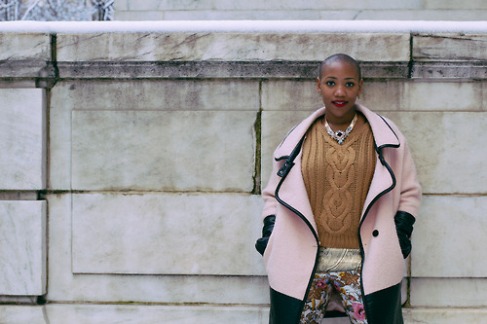 Kiandra Parks, old student of Spike Lee at NYU’s Tisch School of the Arts, and writer/director of the short film based on the novel, “Black Girl In Paris,” has turned to Kickstarter to bring us another film she’s created, and in which she will be writer, director, and now starring actress in! The film in question? “C’est La Vie,” and if the title didn’t tell you, it takes place in the most romantic city in the world.

Kiki and her boyfriend met on New Years Eve. They fell in love in Paris. Their long distance relationship endures ups and downs, but Kiki is sure he is her soul mate; her psychic told her so. Kiki relocates to Paris in a final attempt to make her relationship work, but on her journey she discovers the thing she least expects and learns to surmount her biggest obstacle.

Completely in black and white, the film discusses the ins and outs of love, while being quirky, hip, classic, and effortlessly beautiful.

“C’est La Vie,” is in its last week till the Kickstarter timeline ends. Help Kiandra reach her goal of $15,000 by clicking here!