Recently, we had the pleasure of interviewing our friend, London based playwright Abi Zakarian.  We met Abi whilst in London in December of 2013 for the So and So Arts Club Women in Art event, where her intricate and brilliantly written piece, LuLu 7 played to great acclaim.  Thank you Abi, for being this months Inspiring Woman.

Abi’s plays include: THE BEST PIES IN LONDON, produced by Rift Theatre and YourAreMine, as part of the immersive Shakespeare in Shoreditch Festival; THIS IS NOT AN EXIT, produced by the Royal Shakespeare Company for The Other Place, Stratford-upon-Avon and transferred to the Royal Court; LULU7, produced by So&So Arts at the Tristan Bates Theatre, SWIFTER, HIGHER, STRONGER, produced by Roundpeg Theatre at The Roundhouse; LITTLE FURIES, commissioned by and rehearsed reading at Soho Theatre, and A THOUSAND YARDS, which was produced by Feast Theatre at Southwark Playhouse.

Previously a writer on attachment at Soho Theatre and a current member of the RSC’s writers group, she was also one of the writers involved in the playwright-in-residence Schoolwrights 2014 scheme in East London schools; the two plays created with the students were showcased at both Soho Theatre and Rich Mix.

Abi is currently under commission for theatre companies TREmers and YouAreMine.

Tell us about yourself

I’m an Armenian-British writer living and working in London. Married to a theatre set designer and have a dog called Monty.

Tell us a bit about the work you do, both artistic and otherwise. What sort of projects do you work on?

I work on a combination of commissions and my own projects which my agent sends out on spec. I write plays mainly but am interested in musicals, TV and film writing too.

What have you written?

Tell us about the best part of your work.

This is Not an Exit

Is your work strictly local, or do you have a national/international reach?

Well, since I live in London that’s ‘local’ to my work; I am working on new commissions for a regional tour and Edinburgh festival and I hope to get my work on overseas soon too.

Tell us a bit (more) about what you stand for.

I am a feminist. I don’t write as a feminist however, writing has no gender as far as I’m concerned, but many of my plays do explore gender politics.

How do you manage your day and career?

With discipline. When I first started writing I was also working full time as a picture editor for a national newspaper. I would come home, have dinner, then go and write for at least one hour each night. It took me a year to write my first play, but it taught me to be disciplined. And to not talk too much about what you’re writing. The more you talk about it the less you write it.

What do you hope to achieve with your work?

To make people question their beliefs, their views. To provoke. As long as there is a

residue, a tiny thought that lingers, then I’ve done my job.

What is the long-term vision for your writing? Do you partner with other creatives/companies locally or in other areas?

I want to keep writing plays but also hope to develop TV and film scripts. And I’m really keen to get my musical projects up and running. I am a huge fan of musicals and love the work of Stephen Sondheim.

Who were you most excited about meeting/working with?

I’ve loved working with all the directors, actors, creatives and crews on each project. It’s all about collaboration and seeing what happens when you let your work go and be grown.

When you’re not busy acting as a fabulous writer, what is your daytime job? (If you have another)

I’m lucky enough to write full time. I occasionally contribute to a design and lifestyle blog (I love art, design, architecture) though.

For you, what is the hardest thing about writing? What is your favorite written piece of work?

Hmm. I think the hardest thing about writing is completing a piece; as in, I don’t know that anything I write is ever truly ‘finished’, if that makes sense? I can finish a play, but quite often, the thing I’m writing about is still changing, developing and playing out in a wider sense of the world. My favourite piece of written work is my first produced play ‘A Thousand Yards’; it was such a purely cathartic play for me to write and it feels the most honest and immediate still.

If you could meet anyone in the world dead, or alive, who would it be, and what would you say?

Oh man, this is difficult…I think I’m going to have to recreate the first act of Caryl Churchills Top Girls and have a dinner party with five women: Artemesia Gentileschi, bell hooks, Septima Zenobia, Emmeline Pankhurst and Mary Shelley. An eclectic bunch; I think we’d all drink a lot of fine wine into the early hours and set the world to rights. Or take it over.

Who is your inspiration/role model? What or who has inspired you to write? Do you have a

Many people inspire me: from my mother to friends to people I work with. I also take great inspiration from many writers and artists; I studied art history and architecture at university and love wandering around the National Gallery or the two Tate’s in London; art inspires me. In particular the painter Paula Rego – her work is very allegorical and dreamlike, the artist Louise Bourgeoise’s work is extraordinary and rich in visual metaphor, and I love Cindy Shermans self-portraits; the constant reinvention of the self is a particular fascination of mine. In terms of writers there’s just too many to list! But I am a huge fan of Samuel Beckett. In fact my favourite quote is from his prose piece ‘Worstword Ho’: “Ever tried. Ever failed. No matter. Try Again. Fail again. Fail better.” I have this printed out above my desk and it never fails to keep me going if I’m blocked or doubting my work. It also reminds me that it’s OK to fail; that there’s no shame in it.

What are your upcoming projects? Where can we see you next?

I’m currently working on two new commissions; the first is a one woman show being produced for a regional tour of the UK during summer 2015, the second is a new play for Edinburgh Festival 2015. I’m also collaborating on a site specific immersive piece and developing a new musical. 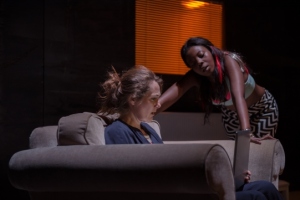 This is Not an Exit

What are your passions?

Define yourself in one word.

Thank you Abi. It has been both an honor and a privilege speaking with you.